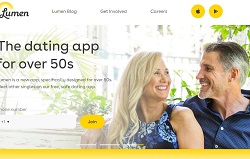 Most of the dating apps found today mostly target young people, usually under the age of 40. Apps like Tinder, Bumble, Badoo, and Grindr fill in the demand by young people who seek to find someone to date, gay or straight. But there is recognition of making a dating app site for those 50 and over, and with 7 million people born from the baby boomer era, there are many who are single. Anew app was launched to cater to that crowd called Lumen. The first app for 50+ age people, it is a place where many in the age range connect with other singles without any false promises. Lumen is from the same investors behind Bumble, making it the first dating app of its kind.

The app is convenient and easy to use for those who don’t like to haggle around and always moving around. There are two ways the Lumen app lets users create an account, by linking their Facebook account or give by phone number. Through a Facebook account, the app automatically syncs basic information including name, sex, and birthdate. If you go by phone number, the details have to put in manually. Then, users need to upload at least two photos for identification. To verify the photos, uploaded a selfie so the pictures can match face. The registration process is easy, but the security could be a nuisance, although it is part of the safety plan.

Everyone can use the app’s messaging features, but those who only have standard level are limited to having five connections a day. Lumen’s first message users sent, what the app calls the “icebreaker,” users must send a message with at least 50 characters on it. Only people with profile pictures can send messages to assure all members that the conversation they are with someone is verified by the app. Also, users must respond to any messages received within 72 hours, or the message will disappear from the inbox to prevent any overflow of unwanted messages.

A concern any user for any app has is the safety and security of their data. With Lumen, they verify photos of every member to ensure that they are different and have a detailed bio instead of any fake accounts used to phish for info. Lumen’s app is also designed to create conversations that give the right, meaningful quality between members on what they like to do with others who live in the area. It is easy to go through the number of members who want friends or possible dates. On top of it all is that Lumen is free to download and use it via Android and Apple.

With almost 75 percent of people aged 50 to 60 owning a smartphone and an estimated 80 million single men and women over the age of 50 around the world, dating apps for seniors is something in demand. It’s been an area neglected by early dating apps and now Lumen is here to fix that and gives the 50+ community a place to meet others for good companionship.

SeniorMatch.com - the first and largest senior dating site for senior singles in the world, thousands of local and worldwide verified members.!